The most authoritative book on the subject
The Sunday Telegraph

The book came out on 1st August 2005, to the accompaniment of an interview on BBC Breakfast. It can be ordered from Seren, see address below, or Amazon at this page. You can 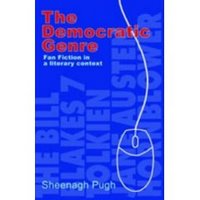 also read the first chapter online, because it was published in the University of Melbourne's online media culture journal Refractory. Oh, and I recently heard the book's gone on the reading list of the media studies school at Bournemouth University.

In January 2011 I contributed to a debate on fan fiction for the US radio programme To the Best of Our Knowledge: Sequels and Spin-offs. There's a link to the interview here

In  2006 I gave a paper on slash fiction, The Erotic Space, on Slash Study Day at the Cultural Exchanges conference at De Montfort University and you can read it on the site. I gave another paper, The Colonel's Lady and Judy O'Grady, about slash and women litfic writers, at the 2007 event,  and have now put it on the site as well. I also gave  a  paper at the third and last Slash Study Day in 2008, "Man Bits and Woman Bits: the discourse of sex in fanfic and litfic" but that one won't be put up here, due to issues of themes and necessary language. But it can be found here on my blog.

And there are some reviews - Sheenagh Pugh's book rightly challenges the lazy assumption that the games people play for little but love in other writers' universes are necessarily without artistic merit [....] a lively book which lovingly details fan writers' private language. - The Independent.

Perhaps the most satisfactory work I've read so far on fanfic, if only because it's not looking for the Single Unitary Theory of why people write fanfic, and not assuming that there is something Really Strange about people who do. It's a good read in itself and has a lot of interesting and thought-provoking things to say. Lesley Hall

It isn't written in elitist "academ-ese". It's a very readable book written by someone who seems to be a fan herself. - Catherine (owner and creator of the Archieology 101 website)

It's what it says, a book that tries to show how this genre of writing evolved, and why, and how it's developed as literature over the last few decades. I've written it, got co-operation from a lot of kind fanfic writers plus their permission to quote them more extensively than any book on the subject has done yet, and, I hope, shown that this isn't just an odd little hobby but a genre in its own right with a lot more readers and practitioners than some think.
I have discussed open and closed canons, historical and futuristic settings, book, film and TV sources and real person fiction (RPF). There are chapters discussing angst, h/c, slash, 'shipper fic - even fan poetry got a look-in... There have been several books about fan fiction as a sociological phenomenon in the context of media studies or women's studies. But this is the first about fanfic as a literary genre, the first to discuss how fanfic writers use point of view, interior monologue or the sonnet form. Also the first to go so far into the vast fan community culture of beta-reading, collaboration and peer criticism. Below is the text of a flier I wrote for it

The Democratic Genre
Fan fiction in a literary context

How did Elizabeth Bennet's marriage to Darcy turn out? What steamy love scenes might have been in The Fellowship of the Ring but weren't? What episodes would fans write for The Bill, given the chance?

Most of us only wonder, but fan fiction writers make it happen. In fanzines and on the net, they take existing canons and characters and play their own variations on them. No world need ever end, no character ever die, while those who want to read new stories about them are also willing to write them.

Literary critics hardly know it exists, yet fan fiction is, thanks to the Net, a fast-growing genre practised worldwide by people of all ages and backgrounds. Its writers (who, in many cases, also write paid fiction) have their own critical apparatus, fiction awards and supportive communities dedicated to getting better at what they do. No money is involved, but a lot of pride is.

This is the first book to consider fan fiction as a literary genre in a long context of canon-based writing, rather than as a curious phenomenon in the field of media or women's studies. It is also the first to quote so extensively from web-based fan fiction and writers' views on mailing lists. The author has used the co-operation of many writers in this field to throw light on a genre most of us have at some time practised in our heads. What were we never shown; what if this character hadn't died; how might the story go on?

From Austen to Lord of the Rings and Holmes to Hornblower, worlds and characters take new shape in the hands of readers who choose also to be writers. Even real, living people become characters in a story.

The Colonel's Lady and Judy O'Grady

Translating the Not Quite